In a previous post on Yield Curve Trading I list all the popular yield curve spreads that institutional and professional traders watch. The TUT spread is the 2-year over the 10-year Treasury futures spread. It’s a pairs trade that’s the difference between the notional values of the two contracts (cash value of the contracts).

Is The Yield Curve Steepening or Flattening?

How to Trade Steepeners and Flatteners

When you put on a steepener, you are going long the front leg of the spread (2-year) and short the back leg of the trade (10-year). Remember price is inverse yield, so you would be expecting the yield of the Front leg (2-year) to underperform the yield of the Back leg (10-year). So a steepener is used when you think longer term yields will be rising faster than shorter term yields.

When you put on a Flattener, you are going short the Front leg (2-year), and long the Back leg (10-year). You’re expecting shorter term yields to rise faster than longer term yields.

Trading with the Proper DV01 Ratio

When trading the TUT, as when trading any of the yield curve trades using futures, you need to be aware of what the proper weighting is for the Front and Back legs. This is because you need to remove the price risk associated with the futures contract due to the non-linear relationship between price and yield. To do this we need to find out how much a contract changes in price for each basis point in yield. This is called the Dollar Value of One Basis Point or DV01. Once we have the DV01 of each contract we can divide one by the other to get the ratio. This will be the weighting, or ratio between the front and back legs.

The calculation for DV01 is a bit involved. You can use a spread sheet and devise your own calculator, or you can use one that the CME Group provides here. 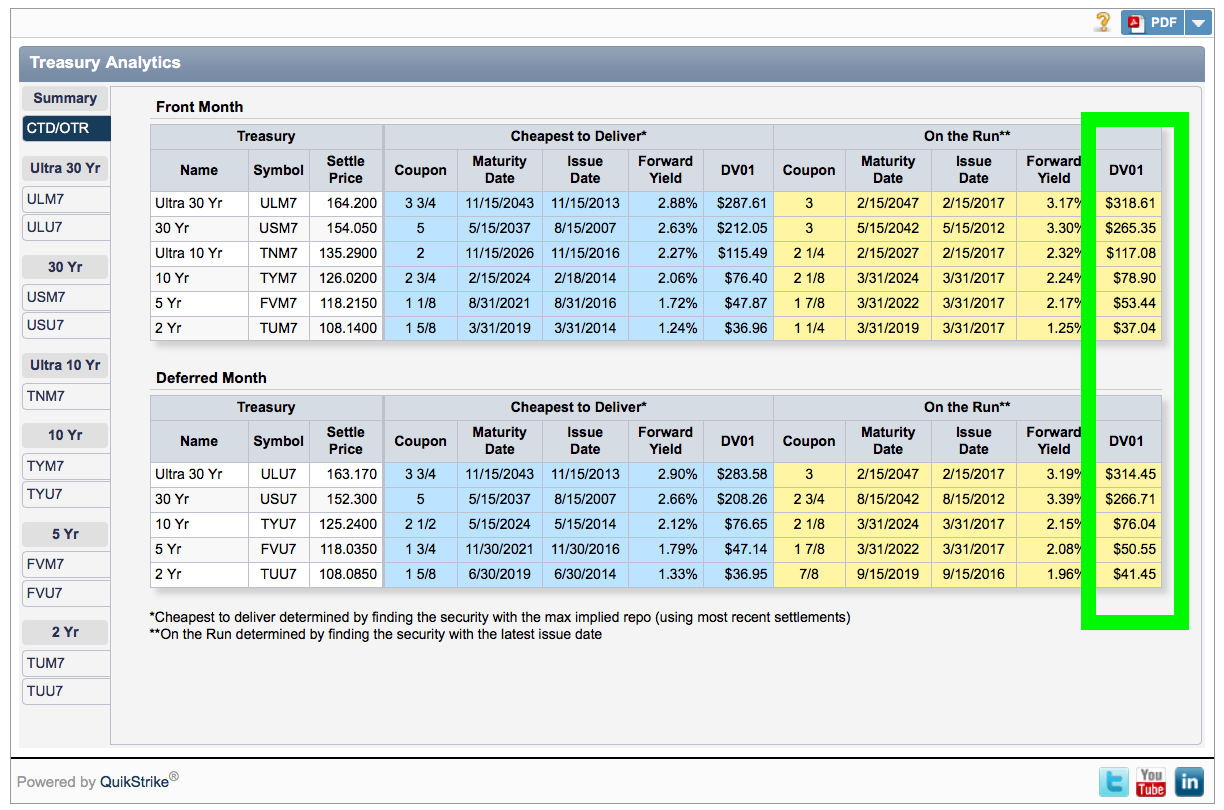 The goal of the ratio is to create relatively equal sided trades in terms of yield. It’s similar to options trading where you attempt to make your trade delta neutral. In this case we can see that the DV01 for the 2-year is approximately 1/2 that of the 10-year DV01 ($37.04 and $78.90 respectively). So it will take two 2-year contracts for each 10-year contract to create a Dollar Value neutral trade.

One thought on “What Is The TUT Spread?”